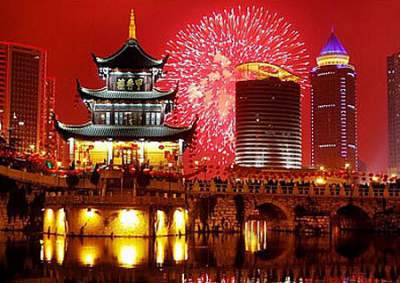 Each civilization has its own customs, legends and cosmological views. The older the civilization is, the richer cultural heritage it has. Immemorial legends and ancient customs have always attracted the attention of an intelligent person.

As you know, the culture of the eastern countries is very rich. Fortunately, the people of Middle and Far East carefully preserved and handed over their cultural heritage to the present day.

We would like to tell you about Chinese New Year which is the most respected holiday in East Asia. It is called Chun Jie, like a Spring Festival. Since ancient times, Chinese New Year is the main and longest holiday in China and some other East Asian countries. Date of commencement of the celebrations is based on the moon phase cycles and matches the first new moon in the new calendar year. Therefore, the Spring Festival is also called “lunar new year”. According to the Chinese calendar the first day of the Spring Festival is the beginning of the next year.

In China each year has its own character. There are 12 characters in a zodiacal cycle. Each of them has its own value, and determines the nature of the coming year. February 19, 2015 the Chinese start their traditional New Year Festival under the sign of the Blue Wooden Sheep (Goat). According to Chinese mythology, the year under the auspices of this noble and graceful animal is going to be beneficial to the stubborn and persistent personalities. Activity in the affairs will become your key to success. Astrologers say that the year of the Blue Wood Goats (Sheep) is a perfect time to create a family. Friendships bring special positive value, so do not neglect this opportunity to make new acquaintances, but remember to maintain and strengthen the old ones. Goat symbolizes femininity, it is characterized by mild and changeable mood, and it will be reflected on the events in the new year. But remember it is just the signs and hints! You are the owner of your life and all depends on you!

According to the ancient tradition, the Chinese celebrate the holiday 15 days and during this time a lot of interesting events occur. The emergence of this holiday is lost in prehistoric times and now we can only guess the preconditions of it. But we know a few legends that describes the Spring Festival. We are happy to share them with you shortly.

The first legend says that a huge and powerful monster Nian comes out of the sea at New Year’s night. The monster devours every living thing in its path. The ancient Chinese were very afraid of him, so on the New Year’s eve the families locked themselves in their homes. They prayed and waited there till the morning comes. It was the only way to save their lives. In the morning, the Chinese go outside, to see the damage caused by Nian, and to check on their neighbors. This disaster went on until the Chinese realized that Nian was afraid of red color, loud noises and bright lights. Once upon a time Nian came and destroyed the whole village. Only one family survived because of their clothes were red. This discovery has contributed to the emergence of the custom to celebrate the New Year wearing red attires, exploding fireworks and firecrackers on the first day of the holiday. This custom has been not only retained to the present day, but also spread to many other countries. By the way, we also have an article about Chinese New Year customs and traditions, and you can read it here.

The second legend says that evil spirits banished from around the world, are scouring the earth looking for a new home on the New Year’s eve. Yet bright flashes and loud explosions make the spirits afraid and protect homes from unexpected guests. By the way, in ancient times instead of modern firecrackers bamboo sticks were used. They were thrown into the fire. It made odd crackling sound vaguely reminiscent of fireworks.

Perhaps both of these legends are two different versions of the same events and the same characters. Perhaps Nian symbolizes evil spirits, or vice versa. But as you can see, anyway the ancient Chinese had good reason to celebrate the Spring Festival just the way they do it up to now. A 15 day long procession is a pretty fair solution to celebrate such a significant victory over the dark forces!

The sages say that the source of national strength lies in its traditions and customs. Perhaps еvery modern nation must learn this positive feature.

And we wish you a prosperous life in the new year and let every day be like a holiday for you.

Thank you for being with us.