How often does a modern person ask himself a question: why in certain situation we have to act in a certain way and not in another way? Where did the definition “tradition” come from? What is the Custom and why is it particularly such as we know it nowadays? Answers to all these questions are hidden in our traditions and culture, which are rooted into the prehistoric times. Ancient people paid much more attention to the question of existence itself, without being concerned with highly technological discoveries, new gadgets, cult of consumption and entertainment. Cultural concepts and cosmological ideologies have been formed in such environment, and we can still observe their remains in the world today. Unfortunately, most of the concepts has been lost or transformed with time and under the influence of global spiritual and material evolution. But naturally these grains that are still preserved to our time and belong to cultures, that proved to be the most resistant, and therefore the closest to the human nature. We guess that many of you, who are reading this, have thought about Asia. And there is no wonder, because this part of the world has maintained a significant part of it’s culture to our times. China takes a special place here, because the representatives of this nation managed to preserve ancient wisdom and traditions through the centuries, and extended the best of them all over the world. One of such traditions is well known to all of us. Yes, in this article we are going to talk about the Chinese tea ceremony. 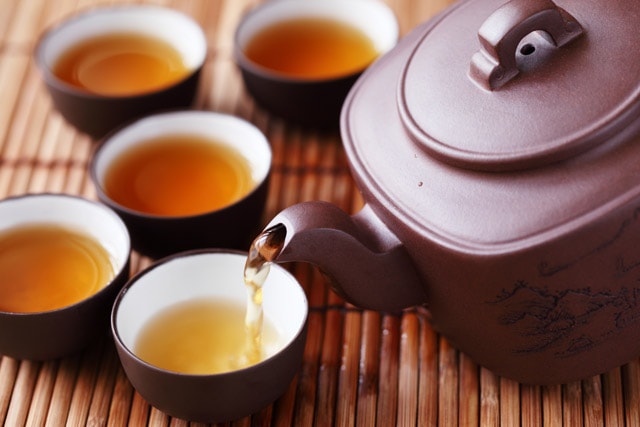 As you know, Kung Fu Cha, or Gong Fu Cha (Chinese tea ceremony) it is not just an act of drinking tea, but a self-contained ritual or even a spiritual practice, which has gone through the centuries.

Chinese legend says that tea was discovered by Shennong, “The Divine Tiller” – the ancestor of the Chinese nation. Shennong had a bull’s head, human’s body, and his belly was made of transparent jade. He spent his life, studying different herbs species, effects of which he could observe through the transparent skin of his belly. Once, he has tasted unknown herb carelessly and then fell ill. Faint Shennong laid down in the shade of a lush bush to recover. Suddenly bush has dropped dew on his guest; Shennong has drunk that and felt a surge of energy. As you guessed, that savior bush has been a tea-tree. Properties of such wonderful beverage have been highly appreciated, which has fostered a culture of tea drinking, eventually gained specific characteristics and huge national importance.

For centuries, an invitation to tea drinking was regarded among the people as a manifestation of respect to the visitor. Family meetings were rarely held without a tea ceremony, especially when relatives managed to get together after a long separation. Joint tea drinking symbolizes the convergence and unity of souls, and it is a sign of honesty and sincerity of purposes. Traditionally tea drinking is accompanied with introduction of families of bride and groom, as well as with the help of tea the just married couple can express gratitude to the parents on their wedding day.

Since the main purpose of the tea ceremony is mental cleansing, finding achievement of peace and harmony, it is not necessarily to wait for a special occasion to perform ritual. Residents of China consume tea almost every day, which only emphasizes the importance of this beverage. The place for the ceremony has high demands: atmosphere has to be relaxing and comfortable. Soft light and beautiful ethnic music complement and strengthen the beneficial effects of the ritual.

How does the ceremony look like? The first step is to “get acquainted” with the tea:  to determine the quality and the structure of the leaves, their color and smell. For this purpose master of Kung Fu Cha gently places tea in a special porcelain vessel – chahai which is passed between all the participants of the ceremony. After the “acquaintance”, each of them is served with a tray of tea pair. Tea pair consists of two bowls, one of which is narrow and high – wen xiang bei, its shape allows you to experience the flavor of the beverage; and the second is, cha bei – wide and low, gives you the opportunity to enjoy the color and, finally, the taste of tea.

Now it is time to brew tea: in order to do this master places leaves into the small porcelain teapot and fills them with hot water. Its temperature should not be higher than 92 degrees Celsius; it is the state of water which Chinese call “sound of the wind in the pines”.  This principle, which has been cultured by Eastern nations for centuries, has been confirmed with scientific facts. The thing is that the boiling water releases some alkaloids which worsen the taste and healing properties of any tea. Another rule of Kung Fu Cha: there should not be too much water – the Chinese believe that excess attracts trouble, and that moderation is the key to wealth.

The first brewing must be non-durable: after 5-10 seconds, the water must be drained. In such way master cleans the leaves of dust and “awakens” the tea.

The second brewing lasts about 30 seconds. After that, it is poured into vensyabey of each participant of the ceremony – high bowl is filled by 3/4 of the volume – and it is covered with cha bei (wide bowl) on the top. Then this construction is turned upside down so cha bei becomes at the bottom. By gentle lifting of wen xiang bei, participants inhale the aroma of the beverage slowly – tea drinking begins.

Then, participants repeat the same procedure. Good tea can be brewed 3-8 times. The taste’s intensity obviously fades, but by no means gets worse, moreover – hidden shades of taste reveal themselves, bringing new unique experience and pleasure of drinking tea.

If you’ve always wanted to gain a new unusual spiritual and esthetic experience then Chinese tea ceremony is what you need! And if you happen to have such a great opportunity, remember this advice: leave all your thoughts behind the doors of the ceremony room, let your body and mind relax, concentrate on the greatness esthetics of the tea drinking ritual and be sure this will bring real peace and freedom to your mind.

Enjoy your tea with Parcel Up (Taobao FOCUS)!

← Christmas in China
Get bonus from Parcel Up (Taobao FOCUS)! →